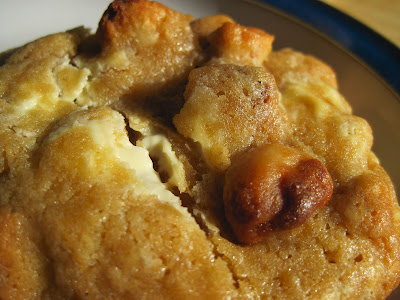 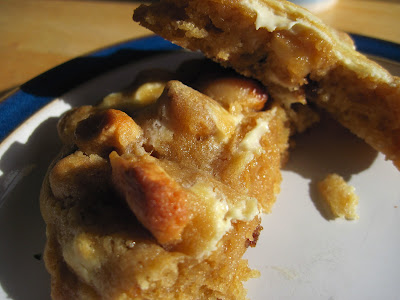 If you want a change from the traditional milk-choc-chip, look no further. With the toasty, nutty warmth of these cookies, the decadence of is certainly not lost through a change to white chocolate or the addition of nuts. 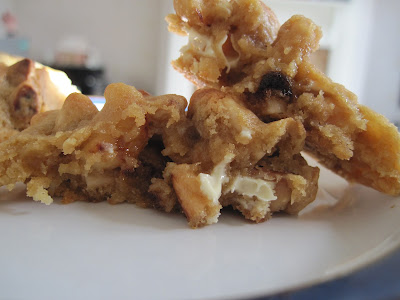 The nuts could be changed for a different type, though macadamias and almonds work very well (the ratio of macadamia:almond could be altered)- if you have allergies or just don't like nuts, they could be omitted and these would still taste great.
I found this recipe on Mr. P's blog, and edited it ever so slightly. I froze these cookies before baking (as I did with the Chocolate Chip Cookies- I froze them in blobs until solid, then transferred them to freezer bags, in which they can remain for up to 6 months). I often do this now, as not only can you have warm cookies in a snap, but the shape, texture -and taste if left for at least 24 hours- seem to improve. 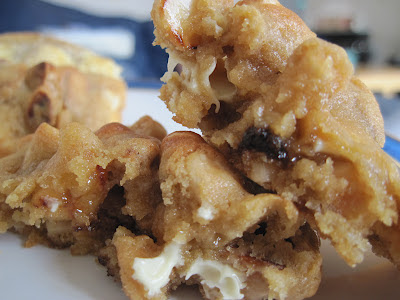 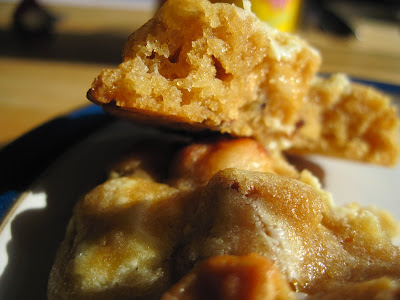 2. Place the nuts into a hot frying pan over a medium-low heat and toast until golden brown. Leave to cool.

3. Cream together the butter and sugars in a large mixing bowl until pale and fluffy, then beat in the vanilla extract and eggs, one at a time.

4. Sift the flour, salt and baking powder into the buttery mixture and mix until completely combined. Add the cooled nuts and chocolate pieces and fold evenly through the dough.

5. Scoop blobs of dough, using an ice cream scoop onto the prepared tray/s and bake in the preheated oven for 8-10 or until lightly golden and darker at the edges.


If you are freezing the dough, scoop the made-up dough into 60ml blobs onto greaseproof paper and place in the freezer for 20 minutes, until the blobs are solid. Put the frozen blobs into a freezer bag and return to the freezer where they can stay for up to 6 months. Cook the dough from frozen- the baking instructions are the same, but with an additional 2- 3 minutes. 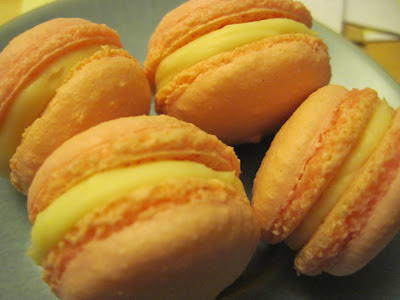 Yep, it's macarons! My first attempt at these fastidious little creatures was made last Summer, and, after searching through a larger number of sites, recipes, tips and videos than I care to disclose, I managed to make a few pretty good batches- some cocoa macarons and a couple of plain batches.
I returned to macaron-ing a little while ago, and then again a couple of weekends ago, trying out some new recipes. I had the most success from a french meringue recipe from Not So Humble Pie's blog. 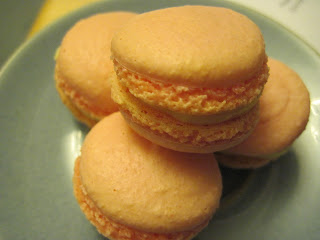 This recipe calls for egg white powder, which you can find in most supermarkets- I used some from Dr. Oetker. This ingredient is important as it helps to stabilise the egg whites and reduce the probability of your macarons falling down any of the many pitfalls that await them. 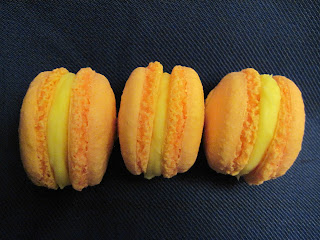 A few important points:
Don't skip the sifting of the ground almonds and icing sugar! It may seem a little tedious, but the tant pour tant must be very fine- the food processing isn't entirely necessary, but makes the sifting easier.
Weigh everything as accurately as possible.
Don't over mix- if you can't tell what "lava" in a bowl is meant to look like (who would?), fold until just incorporated- it's far better to under than over mix.
Don't over beat the meringue- keep it shiny and firm, not dry.

Hit the trays (very) firmly on a work surface.

Use gel, paste of powder colourings rather than liquid.

It really is best to make the macarons at least 24 hours in advance of serving to allow them to moisten and take on the flavour of the filling. The macarons should last for about a week in the fridge. 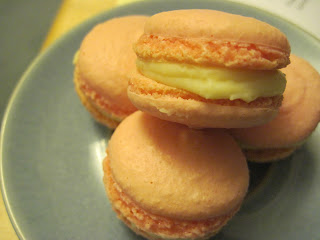 If you're adding colouring, add it just after your meringue forms soft peaks, then beat as you would (to firm, shiny peaks- the colouring should be incorporated by this stage).


1. Line two baking trays with baking paper and set aside.

2. Measure out the dehydrated egg white powder and granulated sugar into a little bowl and stir to combine, then set aside.

3. Grind the icing sugar and ground almonds together in a food processor and sift into a small-medium bowl.

4. In a large, clean, dry bowl of a freestanding mixer, whisk the egg whites until foamy and then sprinkle in the sugar and egg white powder while continuing to beat. Increase the speed of the mixer and keep whisking until a firm, glossy (but not stiff) meringue forms.

5. Using a soft spatula, fold in the almond-sugar mixture to the meringue in thirds, until fully amalgamated. Be cautious not to over mix, as you want the batter to flow off the spatula in a thick ribbon.

6. Transfer the batter to a piping bag with a plain nozzle (approximately 1cm diameter) and pipe round blobs (approximately 1-1½ inch diameter) onto the prepared baking trays. Firmly rap the trays against a counter top until the any air bubbles come to the surface- pop, with a cocktail stick, any which don’t burst. Leave the piped macarons for 30-60 minutes before placing into the lower half of a preheated oven (300F/150◦C/mark 2) for approximately 15 minutes.

7. Allow the macarons to cool on a wire rack before removing from the trays and sandwiches pairs of shells together with your choice of filling. Refrigerate and allow to mature for at least 24 hours.


1. Heat the cream in a small saucepan and bring to a gentle simmer. Chop the chocolate and transfer to a heat proof bowl.


2. Remove from the cream from the heat and pour it over the chocolate. Shake the bowl and set aside for about a minute before stirring to combine.

2. Allow the ganache to cool to room temperature before use. For sandwiching the macarons, pipe or spoon about a teaspoon onto the flat side of half the shells and gently press another shell on top, flat side facing in.
Posted by Liz at 17:42 1 comment: 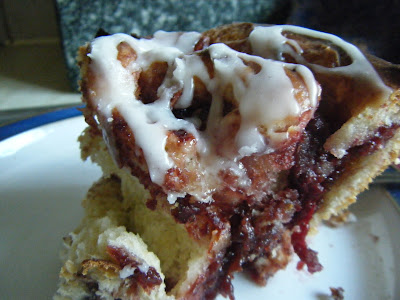 I actually made these a couple of weeks back, but it took me a little while to get round to doing this post. Unfortunately, it may be difficult for me to sustain my rate of a post per week... blame the homework/essays/coursework/revision. I did, of course do a little Mother's Day Creation, but haven't quite finished with the photos yet, so I will try to get that done over the next couple of days. 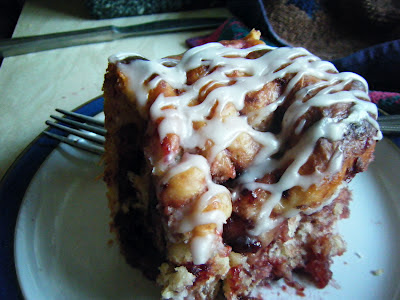 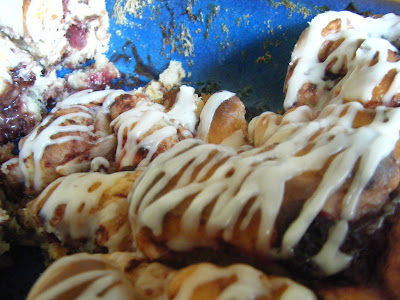 These rolls could be adapted by changing the preserves or nuts- you could even replace the preserves with chocolate chips (and the almonds with hazelnuts or pecans). A Christmas version of these could also be done by adding a dusting of nutmeg or perhaps using a jam complimented by sherry. They are great while still warm from the oven, but will stay fresh for a couple of days- and freeze well, too. I found the recipe from Always With Butter's blog, but the recipe for the dough was found on Food Network. 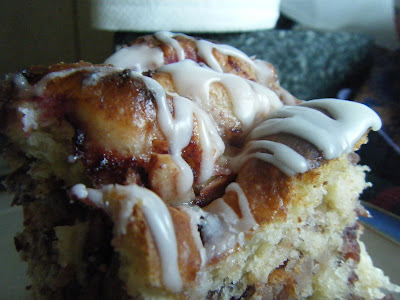 When you roll up the dough, after having spread it with the butter, preserves, cherries and almonds, some of the filling will ooze from the roll, creating a disturbingly red-splattered counter top. This is fine- you can just scrape up the filling and push it into the folds, but make sure you have cleared enough space on your work surface for this.

Remember to start preparing the dough the night before, as it needs to rest in the fridge overnight pre-baking.
If you can't find frozen cherries on their own, they can usually be found in bags of mixed frozen berries (I used some from Tesco which consist of 25% cherries). 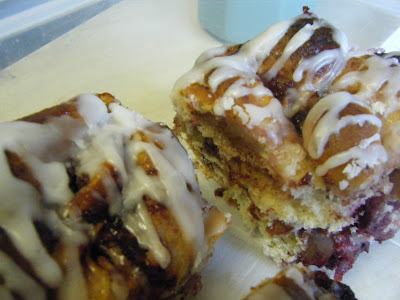 Method:
1. Whisk the egg yolks, egg, sugar, butter and buttermilk in a freestanding mixer, and add half the flour, the yeast and the salt. Knead the mixture together with a dough hook and add a further three quarters of the remaining flour. Continue adding the flour until the dough stops being sticky, but is still moist and smooth, then continue to knead lightly for 5 minutes.

2. Turn out the dough onto a lightly floured surface and knead by hand for 30 seconds before placing into a large, lightly oiled bowl. Cover the bowl and leave for 2 hours, or until doubled in size.

3. Butter a 9x13 inch casserole dish. Turn out the dough onto a lightly floured surface and roll out into a rectangle measuring 18x12 inches.

4. Spread the butter and cherry preserves onto the dough and sprinkle the cherry halves and almonds on top.

5. Roll up the dough into a log and slice into 12 equally-sized rounds (1 inch- thick each)- bear in mind that a fair bit of the filling will ooze out of the sides, but this can simply be stuffed back in through the folds. Arrange the rounds into the casserole dish, so the spiral of filling in each piece is facing up. Cover the dish in cling film and refrigerate overnight.

7. Add a couple of tablespoons of milk or water to the icing sugar in a medium-small bowl until evenly incorporated. Add the vanilla extract more milk/water as required to reach a runny, but not too thin consistency. Drizzle the frosting over the rolls once they have cooled, then slice out each roll and serve.
Posted by Liz at 21:59 No comments: 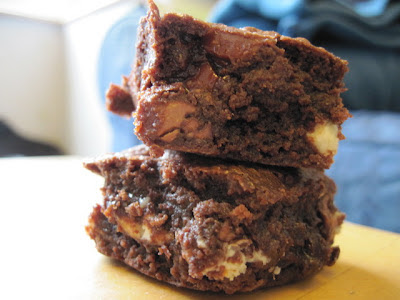 For these brownies, I used three types of chocolate- there is melted dark in the batter base, and white and milk chunks throughout. In order to incorporate some caramel, I used Cadbury's Dairy Milk Caramel chocolate, but you could use any chocolate bar that has runny caramel within. Another way would be to marble the batter with some plain caramel. All in all, a pretty chocolatey brownie. 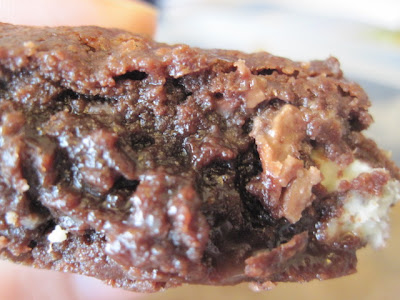 (under an hour post-bake) 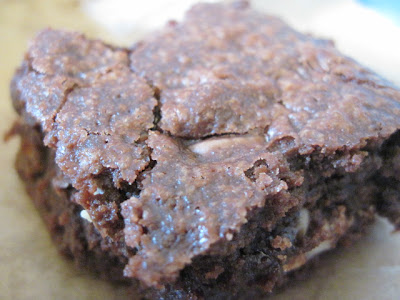 These did remain nicely gooey post-bake, but by the next day, they had firmed up considerably (though not too much)- I usually prefer the brownies the day after the bake, and if you're worried about a lack of solidity, it'll definitely be there after those hours out of the oven. 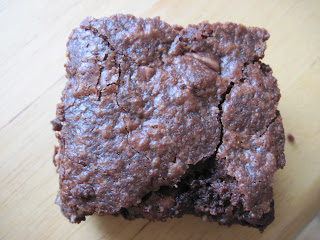 I found the base for this recipe on Mr. P's blog- originally from Martha Stewart, and adapted it slightly. Of course you could omit the chocolate/chocolate caramel chunks for some plain brownies, or add  whatever you like in your brownies (dried fruit/nuts/chocolate/caramel/frosting etc.). 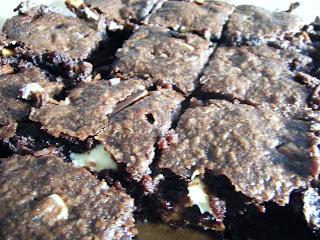 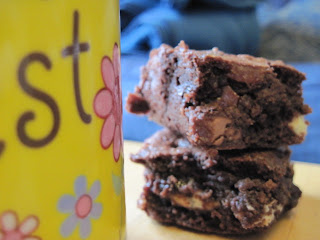 
2. Melt the butter and dark chocolate over a low heat in a saucepan, add the vanilla extract and cool.


3. Sift the flour and cocoa powder into a large bowl and add the caster sugar and salt. Break in the egg and pour in the melted chocolate mixture and beat until well-combined. Fold in the white and milk chocolate chunks.

4. Pour the brownie batter into the prepared tin and stud it evenly with the chocolate caramel pieces. Bake for about 30 minutes, or until a skewer comes out from the centre mostly clean, but the brownie retains some squidge. Leave to cool on a wire rack before removing from the tin and peeling off the greaseproof paper. Slice the brownie into squares.
Posted by Liz at 21:41 No comments: