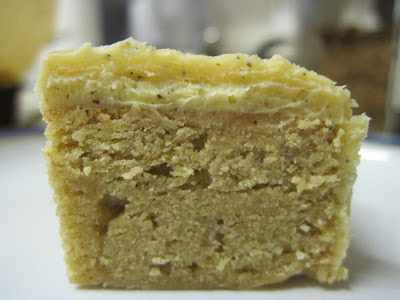 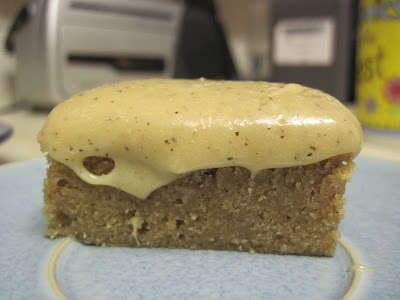 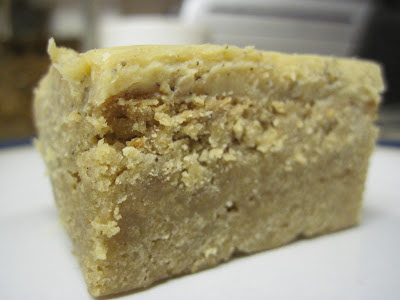 2. Beat together the butter, sugar, eggs and vanilla. Sift in the flour and spices and fold until completely incorporated.

3. Pour the batter into the pan and bake for about 30-35 minutes, or until a skewer inserted in the centre of the blondie comes away clean.

4. For the ganache, bring the cream and spices to the boil in a saucepan over a gently heat. Strain to remove the tea and pour over the chocolate in a heatproof bowl. Mix until the chocolate has completely melted and the ganache is smooth; refrigerate to thicken a little before covering the blondies. 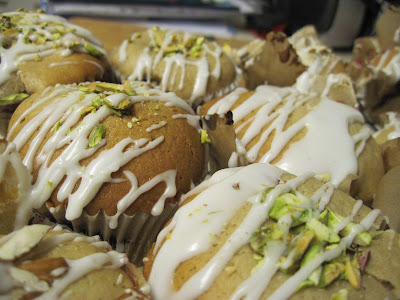 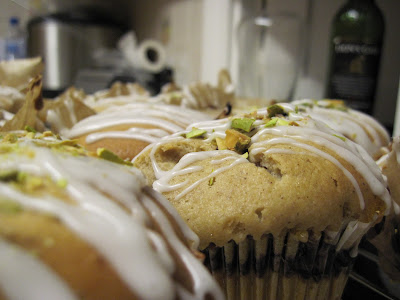 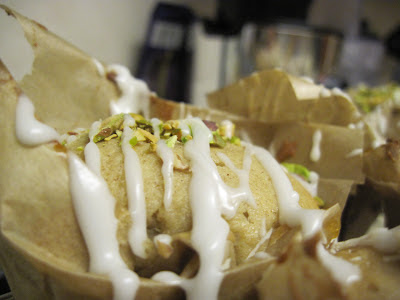 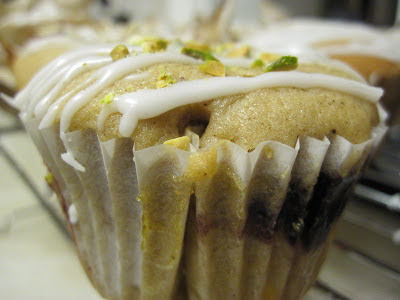 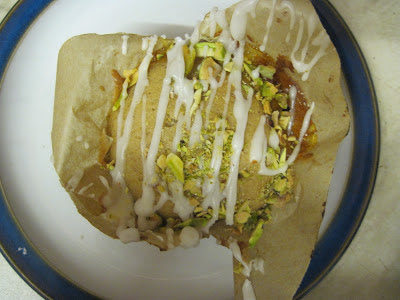 Recipe from Always With Butter

2. Cream together the butter and sugar until light and fluffy and mix in the egg yolks, one by one.

3. In a separate bowl, sift together the flour, baking powder and salt.

4. In alternating thirds, mix the flour mixture and the milk into the butter mixture.

5. In another bowl, whip the egg whites to soft peaks. Carefully fold into the rest of the batter.

7. Bake for about 30 minutes, or until set and a skewer comes away clean from being inserted in the cake (not the jam).

8. Leave to cool on a wire rack. To glaze, mix together the icing sugar with enough milk to achieve a pourable icing and drizzle over the cakes. 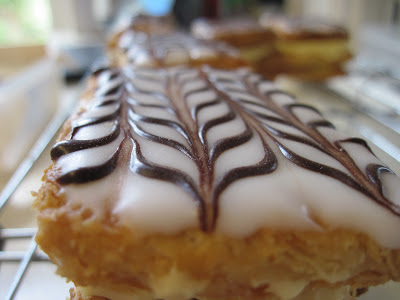 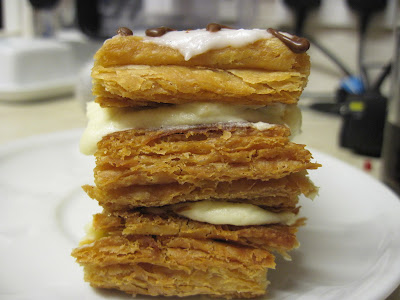 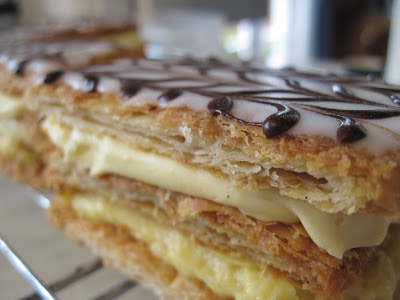 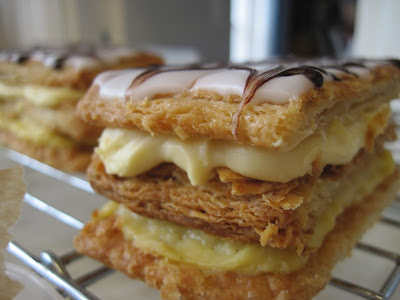 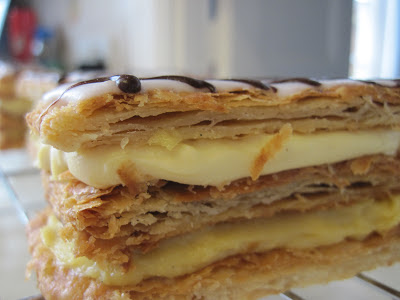 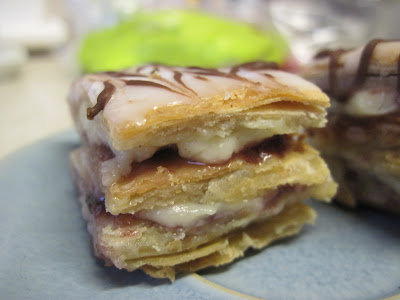 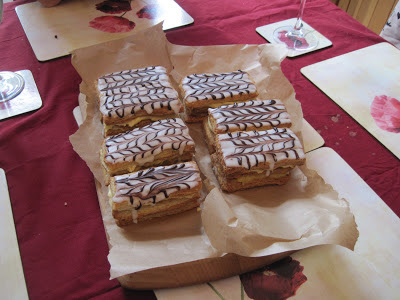 Method:
1. Combine the water, salt and vinegar and set aside.

2. Mix together the flour and melted butter for the détrempe until just combined.

3. Add the liquid  to the butter-flour mixture to achieve soft (but not sticky) dough. Roll out to a rectangle with a thickness of 1cm (about 15x20cm). Wrap in cling film and refrigerate for at least 2 hours.

4. Roll the chilled butter for the beurrage between two sheets of greaseproof paper to a rectangle with the same height and width as the détrempe.

6. To make one turn, roll the pastry out to about 20x40cm. Fold one quarter (lengthwise) of the pastry into the centre and do the same to the other side so that the length becomes half what it was before folding. Fold this in half. Refrigerate for at least one hour.

8. Roll the pastry out to a thickness of about 3-4mm and slice into three equal portions (the portions may be too large to fit on a baking tray, and therefore you should divide the portions further, but ensure that the number of rectangles is equal to a factor of 3. Aim for a width of approximately 4-5 inches . Cut each portion into evenly-sized rectangles. Place the pastry on a baking tray lined with baking paper and bake at 200C/400F/mark 6 for 10 minutes. Top with another sheet of baking paper and a baking tray and bake for a further 6-8 minutes, or until crisp and golden on top and dry throughout the layers. Leave to cool before assembling.

Method:
1. Place the milk, cream and vanilla in a saucepan and bring to the boil. Remove from the heat and leave to infuse for 10 minutes. Remove the vanilla pod, if using.

2. In a bowl, whisk together the egg yolks and caster sugar until pale and creamy. Whisk in the flour. Gradually whisk in the milk mixture, and once combined, pour the mixture back into the saucepan.

3. Bring the mixture to the boil and cook for a further two minutes, whisking continuously. Remove from the heat and pour the pastry cream into a bowl. Leave to cool before covering with cling film (ensure the cling film touches the surface of the crème patissière) and refrigerating until cool.

To assemble, sandwich three of the pastry sheets on top of each other with a layer of vanilla cream between each sheet (a thin layer of jam could be spread onto the pastry before this is done).
Spread a thin layer of white icing (sifted icing sugar, vanilla extract and enough water or milk to achieve a suitable consistency) on top of the vanilla slices.
Pipe parallel lines of melted milk/dark chocolate over the icing and use a toothpick or knife edge to run (perpendicular) through the lines.
Posted by Liz at 21:51 No comments: 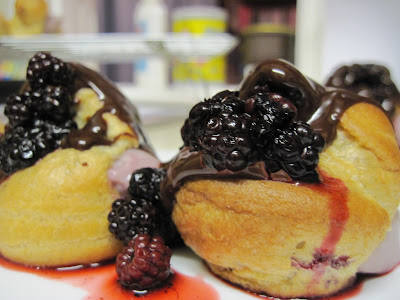 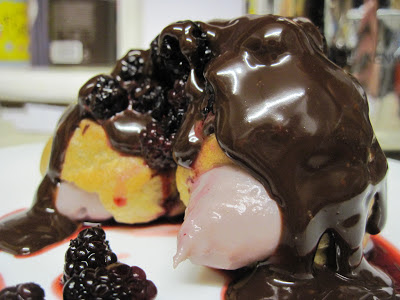 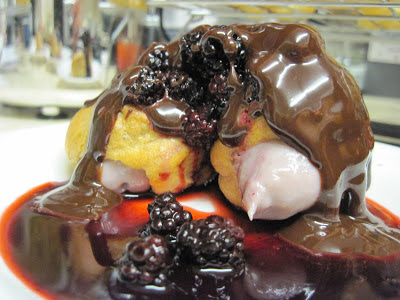 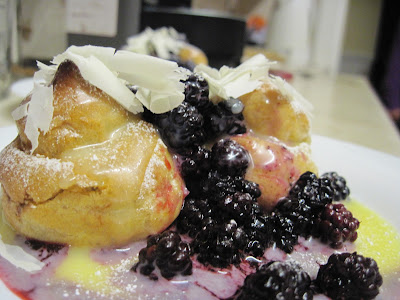 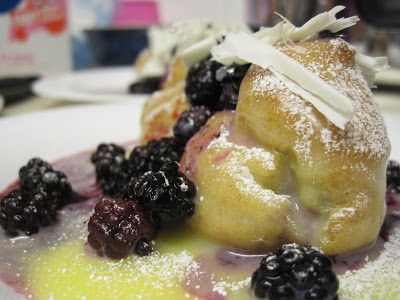 Recipe for choux pastry from The Good Housekeeping Cookery Book

2. Melt the butter in a small saucepan with 150ml water. Bring the mixture to a rapid boil then remove from the heat and beat in the flour and salt. Leave to cool for 10 minutes.

3. Gradually mix in the eggs, ensuring they have been well incorporated after each addition.

4. Spoon or pipe the pastry into 18 blobs onto the prepared baking trays, leaving at least an inch between each for expansion. Bake for 20-25 minutes, or until risen, golden brown and crisp on the outside. Use a sharp knife to make a small hole in the side of each profiterole and return to the oven for 5 minutes, or until the interiors are dry. Leave to cool on a wire rack.


Method:
1. In a large heatproof bowl, whisk together the eggs, sugar and flours until pale and smooth.

2. Bring the milk to a boil in a large saucepan.

3. Add a little of the hot milk to the egg mixture and whisk to combine. Gradually whisk in the rest of the milk, pour all the mixture back into the saucepan and continue to heat. Add vanilla and whisk continually, until the mixture thickens and is completely smooth.

4. Take the crème patissière off the heat and place in a heat proof bowl. Mix in the blackberry puree, ensuring the mixture remains thick. Leave to cool before refrigerating.

Method:
1. Break the chocolate into pieces into a bowl.

2. Bring the cream to a simmer in a small saucepan and pour over the chocolate. Leave for a minute before stirring until the ganache is homogenous. Leave to cool and refrigerate, as required, to thicken before use.

To assemble:
1. Pipe the crème patissière into the hollows of the profiteroles through the little slits in the side.

2. Heat the ganache or allow it to cool to achieve a a suitable consistency before pouring over the profiteroles.

3. Top with a little more blackberry purée, a few blackberries, some chocolate shavings and a dusting of icing sugar.